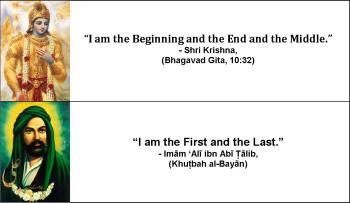 Imām ‘Alī ibn Abī Ṭālib once proclaimed this soul-quaking utterance in his “Sermon of the Great Explanation”:

“I am the Sign of the All-Powerful. I am the Gnosis of the Mysteries. I am the Threshold of Thresholds. I am the companion of the radiance of the divine Majesty. I am the First and the Last, the Manifest and the Hidden. I am the Face of God. I am the mirror of God, the supreme Pen, the Tabula secreta.”

How can such powerful statements of the Imām be explained? The eminent scholar Henry Corbin reminds us that:

“Here it is not this or that Imām that speaks in his own name, but an Eternal Imām.”

Ismā‘īlī Muslim philosophy describes how an innumerable number of Imāms have been present on earth through a myriad of Cycles and Periods (see our previous post for details).  But underlying the plurality and multiplicity of the historical Imāms is a single Light (nūr) or Reality (ḥaqīqah) – the “Eternal Imām”:

“In the Ismā‘īlī theosophy the seven Imāms of the seven periods of a cycle epiphanize the essence of a unqiue and Eternal Imām.”

What is the Eternal Imām? God is the Absolute Reality (al-Ḥaqq), the Essence (al-dhāt), the Originator (al-Mubdi‘) of all existence – totally transcending all names, attributes, descriptions and qualities including even being and non-being. The Eternal Imām is the first origination and the first manifestation of God – known as the Divine Word (Arabic: kalimah; Greek: Logos), the Muhammadan Light (nur Muḥammadī) and the Universal Intellect (al-‘aql al-kull) in Sufism and Ismā‘īlī gnosis in accordance with the well-known ḥadīths of the Prophet:

The Eternal Imām is the Supreme Name of God which comprises all the Divine Names and Attributes: the Living (al-ḥayy), the Self-Subsistent (al-qayyūm), the Knowing (al-‘ālim), the Perfect (al-tamm), the High (al-‘alī), the All-Merciful (al-raḥmān), the Eternal (al-qādim), the Creator (al-khāliq), the Sustainer (al-rabb), the Light (al-nūr), the One (al-wāhid), the Witness (al-shāhid), the Face of God (wajh Allāh), etc.  Thus, the Eternal Imām is the greatest manifestation and the eternal “personification” of the transcendent Absolute in the form of Names and Attributes – the ‘Lord’ who is directly worshipped and adored by the creatures.  But the Eternal Imām is not God Himself: the Absolute Reality (al-Ḥaqq), the Essence (al-dhat), the Originator (al-Mubdi‘) remains forever transcendent and inaccessible, exalted above all attributes and relationships.

The historical Imām is both the mirror and the reflection of the Eternal Imām.  A mirror does not possess anything and is poor before the object it reflects.  The historical Imām – as the mirror – is the most humble Servant of God (‘abdu’llāh), the Friend of God (walīyyu’llāh), the Proof of God (hujjatu’llāh) and the Vicegerent of God (khalifatu’llāh) amongst humankind.  This is why one finds the Imāms uttering some of the humblest supplications (du‘ā’) before their Lord:

“I praise Thee, – and Thou art worthy of praise – for Thy benefaction toward me, the lavishness of Thy favours toward me, and Thy plentiful bestowal upon me, and for showing bounty toward me through Thy mercy and lavishing Thy favour upon me. Thou hast done well toward me, I am incapable of thanking Thee.”

“I am the Sign of the All-Powerful. I am the Gnosis of the Mysteries. I am the Threshold of Thresholds. I am the companion of the radiance of the divine Majesty. I am the First and the Last, the Manifest and the Hidden. I am the Face of God. I am the mirror of God, the supreme Pen, the Tabula secreta.”

“Indeed, Allah created us and formed us, and gave us the most perfect form. He made us His Eye over His Servants, and His Speaking Tongue, through which He speaks to His Servants. We are His Open Hand, extended with Mercy and Kindness to His Servants. We are His Face, through which He is reached, and the Gate which indicates upon Him. We are His reservoir in the heavens and Earth. Through us, the trees grow and the fruits are ripened. Through us the rivers flow, and through us the succour of the skies comes down. We plant the grasses of the Earth. Through our worship, Allah is worshipped. If it were not for us, Allah would not be worshipped.”

Some readers may be shocked by such statements being uttered by the Imāms. What must be remembered is that the pure human soul of the historical Imām is utterly humble before God and aware of his own nothingness in the face of the Divine.  The Imām’s pure soul is completely effaced in the light of the Eternal Imām because of his awareness of his own creature-hood. Like a perfectly polished mirror which is empty of all dust and rust, the soul of the Imām – empty of all sins, egotism, and individual pride – is the mazhar that perfectly reflects the light of the Eternal Imām (i.e. God’s Names and Attributes) through his own words and deeds.  There is no question here of ‘incarnation’ (Arabic: ḥulūl – of God entering into the creature and ‘taking on flesh’): the Eternal Imām is not inside the body of the historical Imām; God does NOT become man.  But the Divine Names/Attributes are truly reflected in the soul of the historical Imām who is but the mazhar – the locus of manifestation or epiphany.

“The ‘friends of God’, who know they are nothing in the face of the Absolute, are the ones who most faithfully reflect the Divine Names and Qualities, which belong not to them but to God… The reflections of these divine attributes shine through them most clearly precisely because the mirrors of their hearts have been polished by the remembrance of God; and the most persistent stains—those imprinted by egotism—have been removed.”

The Eternal Imām has always manifested in the form of the historical Imāms throughout the ages of humankind.   Thus, one should not be surprised to know that the Imām’s spiritual sanctity and divine mission – known as walāyah – is universal and has been revealed and declared in all revelations, scriptures, and religious traditions.  The Imām Ja‘far al-Ṣādiq (the fifth Imām of the Muḥammadan Cycle) has that:

Some South Asian and Persian Ismā‘īlī texts locate Shri Rama and Shri Krishna in the hereditary lineage of historical Imāms (the earthly manifestations of Eternal Imam) which spans back before the biblical Adam (see our previous post – From Ādam to Āgā Khān: The Universal Imāmat for more details).

To demonstrate the reality of the Eternal Imām, we present below a side-by-side comparison of the ecstatic self-declarations found in the Songs (gīta) of Mawlānā Shri Krishna and the Sermons (balāgha) of Mawlānā ‘Alī.  Most remarkably, the “I AM” declarations of these two exalted personalities are extremely similar.   In the last analysis, it is the Eternal Imām – regardless of the form of His historical manifestations – who speaks and proclaims His Eternal Identity:

“Even if the sermon was not in reality pronounced by the First Imām…it was, at a given moment [pronounced] by an Eternal Imām, in the Shī‘ī consciousness, and it is this that matters from a phenomenological point of view.”

The Songs (Gita) of Shri Krishna and the Sermons (balagha) of Imām ‘Alī: 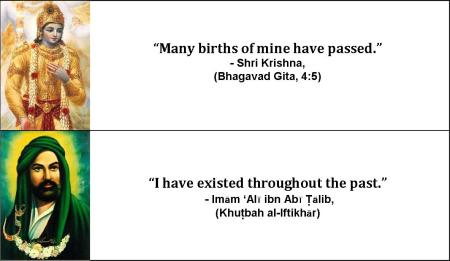 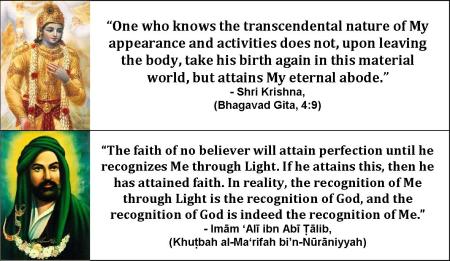 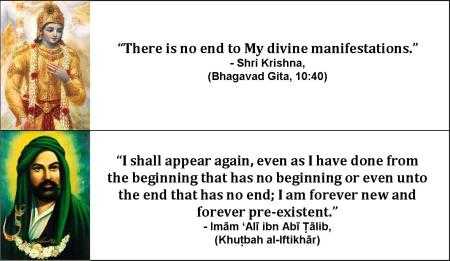 The Creator and the Fashioner: 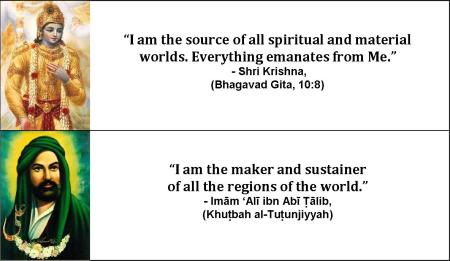 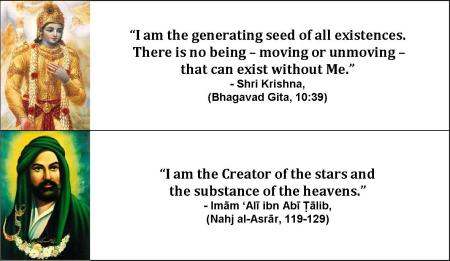 The Creator and the Destroyer:

The Sustainer and the Provider: 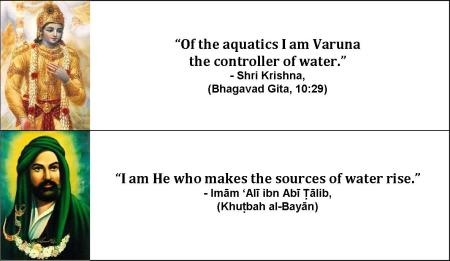 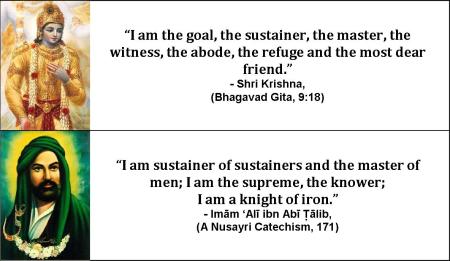 The Judge and the Resurrector: 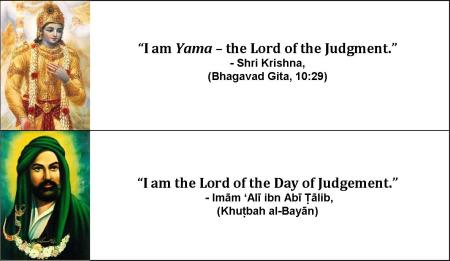 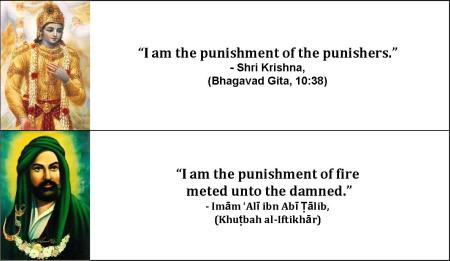 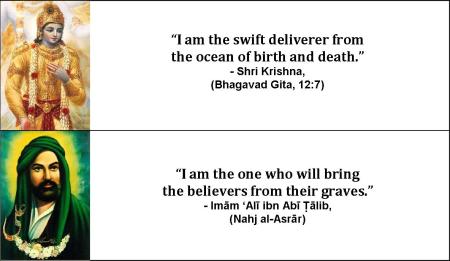 The All-Encompassing and the Omnipresent: 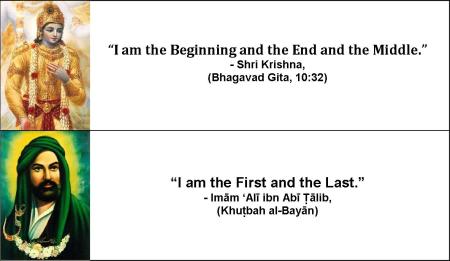 The All-Knowing and the Omniscient: 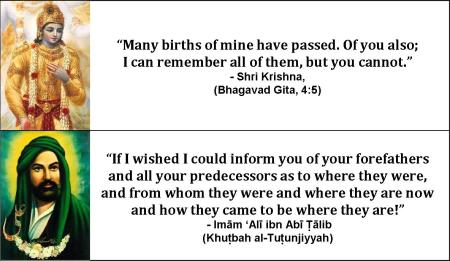 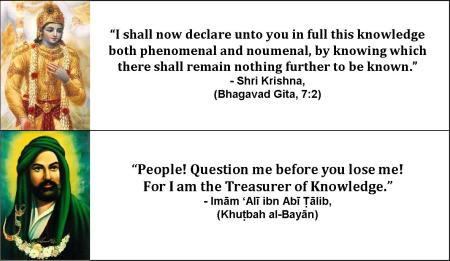 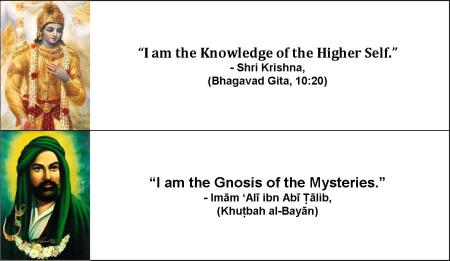 The Revealer of Scripture and the Teacher of Gnosis: 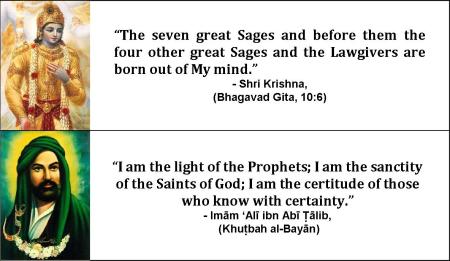 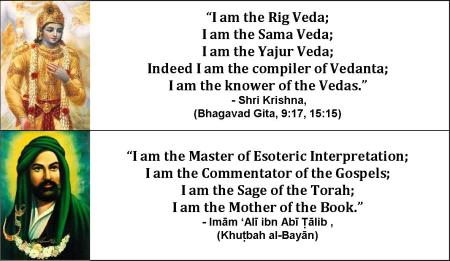 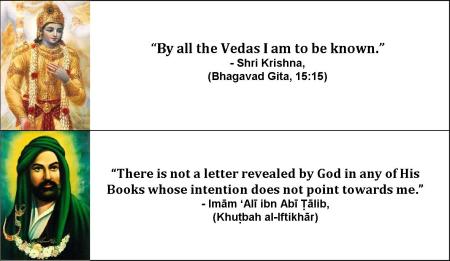 The Manifest and the Immanent: 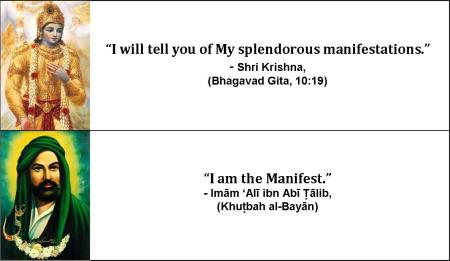 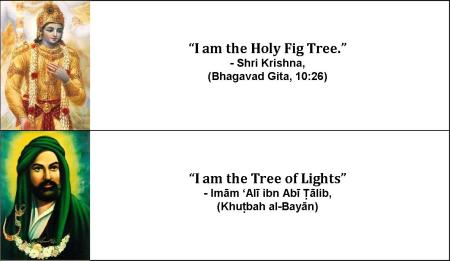 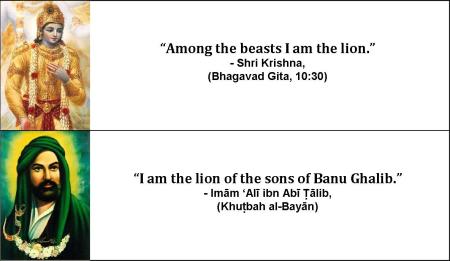 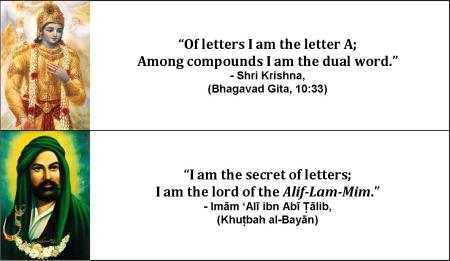 Historical Names of the Eternal Named:

Sources:
(Note: Some translations will slightly differ from the above)

10 thoughts on “The Eternal Imam: Songs of Krishna – Sermons of ‘Alī”